The k-d tree is a k-dimensional tree, which is commonly used for spatial division and neighbor search. It is a special case of a binary space division tree. Generally, for a data set whose dimension is k and the number of data points is N, k-d tree is applicable to the case of N≫2k.

1.1) Tree construction
A balanced k-d tree whose distance from all leaf nodes to the root node is approximately equal. However, a balanced k-d tree is not optimal for application scenarios such as nearest neighbor search and spatial search.
The construction process of the conventional kd tree is as follows: the loop sequentially takes each dimension of the data point as a segmentation dimension, takes the median value of the data point as a segmentation hyperplane, and hangs the data point on the left side of the median value. Left subtree, hangs the data point to the right of the median in its right subtree. Recursively process its subtree until all data points are mounted.
a) Segmentation dimension selection optimization
Before the construction begins, compare the distribution of data points in each dimension. The larger the variance of the data points in a certain dimension, the more dispersed the distribution, and the smaller the variance, the more concentrated the distribution. Cutting from the dimension of large variance can achieve good segmentation effect and balance.
b) median selection optimization
First, before the algorithm starts, the original data points are sorted in all dimensions once, stored, and then in the subsequent median selection, there is no need to sort their subsets every time, which improves performance.
Second, a fixed number of points are randomly selected from the original data points, and then sorted, and the median is taken from each of the sample points each time as a segmentation hyperplane. This approach has proven to be very good performance and well balanced in practice.
This paper uses the conventional construction method, with a set of two-dimensional plane points (x, y) (2, 3), (5, 4), (9, 6), (4, 7), (8, 1), ( 7, 2) As an example, the following figure is used to illustrate the construction process of the kd tree.
a) When constructing the root node, the segmentation dimension at this time is x, and the above point set is sorted as (2, 3), (4, 7), (5, 4), (7, 2) in the x dimension from small to large. , (8,1), (9,6); where the value is (7,2). (Note: The median of 2,4,5,7,8,9 in mathematics is (5 + 7)/2=6, but since the median of the algorithm needs to be within the set of points, the value calculation in this paper Use len(points)//2=3, points[3]=(7,2))
b) (2,3), (4,7), (5,4) hang on the left subtree of the (7,2) node, (8,1), (9,6) hang on (7,2) The right subtree of the node.
c) When constructing the left subtree of the (7, 2) node, the point set (2, 3), (4, 7), (5, 4) at this time has a split dimension of y and a median of (5, 4) As a split plane, (2,3) hangs in its left subtree, and (4,7) hangs in its right subtree.
d) When constructing the right subtree of the (7, 2) node, the point set (8, 1), (9, 6) is also the sigma dimension of y, and the median value is (9, 6) as the segmentation plane. (8,1) hangs in its left subtree. At this point, the k-d tree is built. 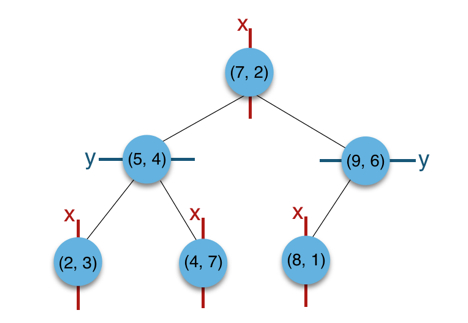 The above construction process can be seen in the following figure. Building a k-d tree is a process of gradually dividing a two-dimensional plane. 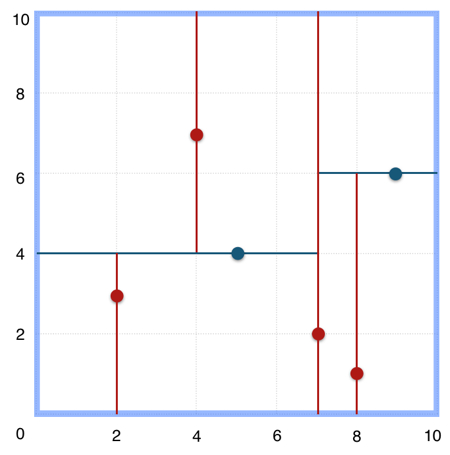 We can also combine the following figure (the figure is taken from Wikipedia) to look at the construction and spatial division process of k-d tree from the three-dimensional space. 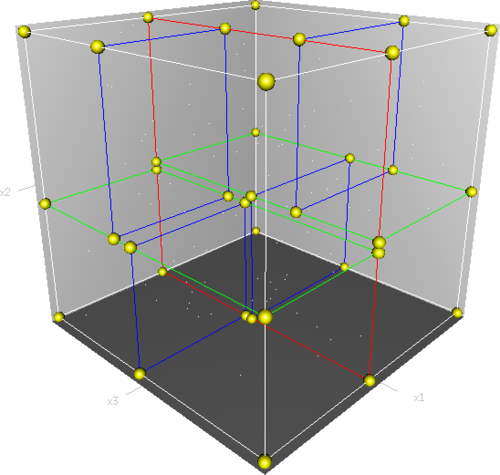 The following is the build code for the k-d tree:

Adding a node multiple times may cause a tree imbalance. When the imbalance exceeds a certain threshold, rebalancing is required.
1.4) Delete node
The easiest way is to make all the child nodes of the node to be deleted into a new collection and then rebuild it. Mount the constructed subtree to the deleted node. The performance of this method is not good, and the optimized algorithm is considered below.
Assuming that the segmentation dimension of the node T to be deleted is x, the following is considered according to different types of nodes to be deleted.
a) no subtree
It is a leaf node itself and is deleted directly.
b) There is a right subtree
Look for the node p with the smallest x-division dimension in T.right, and then replace the deleted node T; recursively delete the node p.
c) no right subtree has left subtree
Find the node p with the smallest x-division dimension in T.left, ie p=findmin(T.left, cutting-dim=x), then replace the deleted node T with node p; use the original T.left as p.right; Recursive processing deletes node p.
(The reason why the findmax(T.left, cutting-dim=x) node is not used to replace the deleted node is because the left subtree node of the original deleted node has the same maximum x dimension, thus destroying the left child. The coordinates of the tree in the x-division dimension need to be smaller than the definition of its root node)
The following is the removal of the node code:

The following is the nearest neighbor search code:
3) Complexity analysis

4) scikit-learn use
Scikit-learn is a practical machine learning class library with KDTree implementation. The following example is a visual display. Only a k-d tree of a two-dimensional space is constructed, and then a k-nearest neighbor search and a range search of a specified radius are performed. The retrieval of multidimensional space, the calling method is not much different from this example. 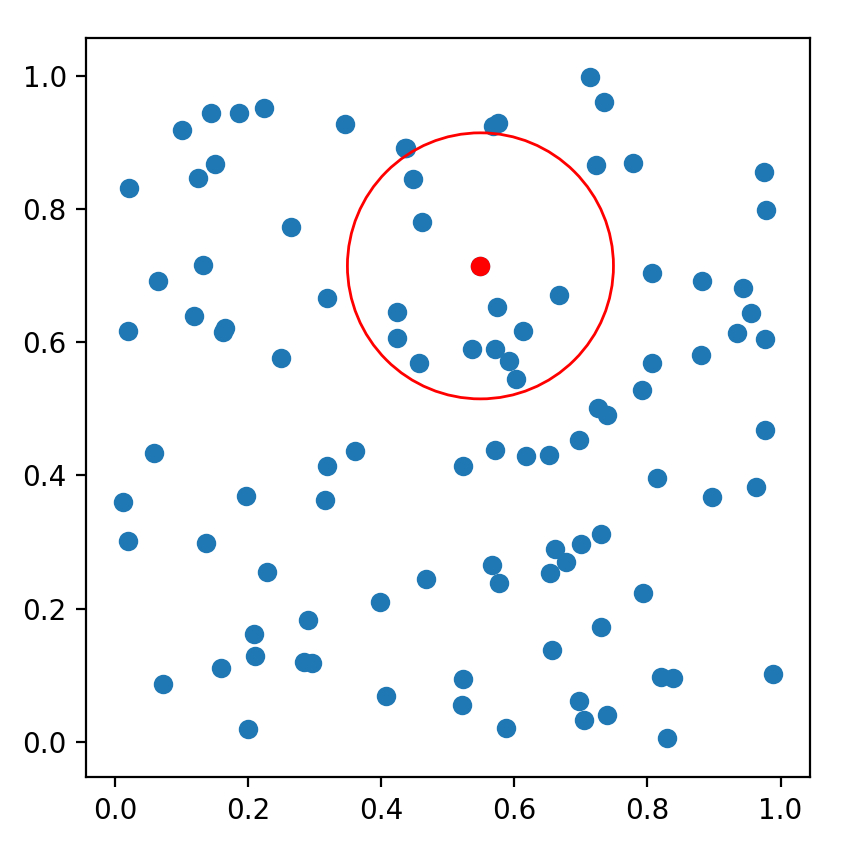